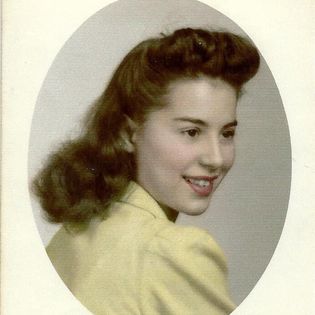 A child of a section foreman for the Missouri Pacific Railroad, she moved several times before settling in Redfield, Arkansas. She graduated valedictorian of her class. Shortly after WWII, she met a handsome young pilot named Ralph at a fish fry on the Arkansas River. They remained totally smitten with each other and happily married for 65 years. Jeane’s life as an Air Force wife took her to New York, Maryland, Ohio, Libya, California, Nebraska, and finally, Arizona.

Jeane loved playing games, watching birds, growing roses, learning, and nightly Jeopardy. Jeane was a very popular team member in Trivial Pursuit. She was an accomplished seamstress and a dynamite from-scratch cook. She was a founding member of the Gov. Hunt DAR Chapter. Jeane was active in her church, sang in the choir for almost 50 years, and ran the Meals On-Wheels program. Jeane was warm, gracious, and welcoming with a rare generosity of spirit.

Our sincere thanks to the staff at Bee Hive Homes of Gilbert for the love and care given to her for the past five months.

Services will be held at Grace United Methodist Church in Mesa, AZ on November 13 at 1:00 pm.
In lieu of flowers, please consider a donation to Alzheimer’s Association or Macular Degeneration Research.