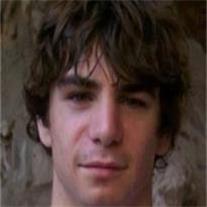 Zachary Joseph Marco, 21 years of age, born September 20, 1989, was tragically taken from us October 17, 2010. The oldest of three children, Zach is survived by his parents, Daniel J and Claudia R Marco, his beloved sisters Kathleen (Katie) Danielle, and Michelle Rae, grandparents, Richard J. Marco, Sr. and Shirley Ann Marco of Medina, Ohio, and Evelyn R. Bochkoros of Middleburgh Heights, Ohio, aunts Cheryl Lynn Pobega and Camila Bochkoros, uncles Richard J. Marco, Jr., and Kenneth J. Marco, as well as numerous cousins. Zack was a junior at the Barretts Honors College of Arizona State University where he was studying Political Science and Philosophy. He planned on joining his father in the practice of law. Zachary was beloved, not only by his family and friends, but by numerous people he met at ASU where he tutored Political Science and at Red Mountain High School where he lettered in football, wrestling and cross-country. He made many friends at the Arizona State Senate while serving as a Page, on all of whom, he left his mark. Zack also participated in a number of service organizations, including Habitat for Humanity. There will be a viewing at Bunker’s Garden Chapel, 33 N. Centennial Way, Mesa, AZ on Tuesday, October 26th, 2010 from 6-8 PM. A short memorial service will be held Wed., Oct 27, 2010 at 1 PM at Central Christian Church, 933 N. Lindsay Road in Mesa. Donations may be made to the Tempe Police Department’s Silent Witness Program (480 WITNESS) in Zack’s name. Zack – We so miss and love you! There is so much more that could be written about his life till today, and so much of his life that will remain unwritten forever.