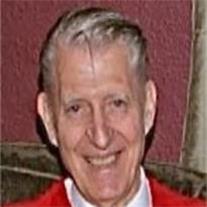 William Theodore De Martino died May 7, 2012 at the age of 87. He was born in Newark, New Jersey, October 27, 1924 of immigrant parents. At nineteen he enlisted in the Navy in the World War II conflict, serving in the Construction Battalion at Guadalcanal in the Pacific area. It was a period of his life of which he had vivid recollections and which he always remembered with pride.

Bill later married Rita Helen Hein, and they were parents of two children –William De Martino, Jr. and Carolyn. They lived in Florida for 26 years in the Fort Lauderdale area, where he worked as a machinist. He finally moved to Arizona in 1980, a place he truly loved. Rita died in 1992. Later he married Lorraine Pratt.

Bill was an outstanding husband and father and a much beloved grandfather to the many grandchildren and great-grandchildren of his combined families. Everyone who knew him was impressed with his fine character, his integrity, his ability to work hard and solve problems, his kindness, selflessness, and love. He is and will always be an inspiration to his posterity.