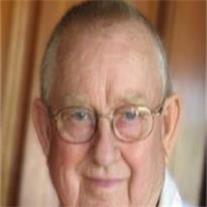 Bill Biesemeyer, 86, passed away on August 12, 2013. He was born on February 1, 1927 in Marshall, Missouri, to Arthur Biesemeyer and Valera Fales. After serving in the Navy, he moved to Arizona where he married Joan McCarty on March 18, 1950. They were sealed in the Manti, Utah LDS Temple on September 5, 1981. Bill was the inventor and builder of Biesemeyer Boats in Phoenix, the owner of Biesemeyer Cabinet and Millwork in Show Low, and established Biesemeyer Manufacturing in Mesa in 1980. Despite a limited education, he was a very talented carpenter and inventor of several products that revolutionized the boating and woodworking industries. His products are world renowned for their precision and reliability. After retiring, he continued to enjoy constructing and flying model airplanes. He has always found his greatest success and joy in his family. His positive attitude and integrity have been an inspiration to his family as well as many others. He was preceded in death by his parents, his wife, Joan, his brother Rusty Biesemeyer, and his daughter-in-law Cindy Biesemeyer. He is survived by his son Dan Biesemeyer of Chandler, Arizona, his daughter Diane (Terry) Palmer of Syracuse, Utah, his sister Vera Hayter of Parowan, Utah, nine grandchildren and 32 great-grandchildren. Visitation is Friday, August 23, from 6-8 pm at Bunker’s Garden Chapel, 33 N. Centennial Way, Mesa. Services are Saturday, August 24, at 10 am, preceded by a visitation at 9 AM at the LDS Church, 1455 N. Harris, Mesa.