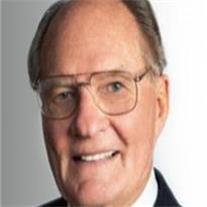 William Jess Skousen, 80, of Mesa, AZ, passed away on December 5, 2012. He was born Sept. 22, 1932 in Phoenix, AZ, to Jess Earl and Amy Riggs Skousen. He was a caring and loving husband, father, grandfather, and great-grandfather. He married Joan Taylor Skousen on June 10, 1954 in the Mesa Arizona LDS Temple. He graduated from Brigham Young University and received his law degree from the University of Arizona. He served our country for two years at Edwards Air Force Base. Some of the things he enjoyed most in life were hunting, working out at the gym and his family. He was a faithful member of The Church of Jesus Christ of Latter-day Saints. He has served in numerous Church callings, including Bishop, High Council, Counselor in the Bishopric, High Priest Group Leader, Young Men’s President, Gospel Doctrine Teacher, and Priest Quorum Advisor. He and Joan served a full-time CES Mission for the Church of Jesus Christ of Latter-day Saints in southern California. He also enjoyed winning many tournaments as church softball coach and was currently serving in the Mesa LDS Temple. He was the founding partner of the law firm Skousen, McLaws and Skousen, which later became Skousen, Gulbrandsen and Patience. He was a prominent attorney and received a preeminent rating from his peers. He was preceded in death by his wife of 53 years, Joan and his grandson Ryan Gulbrandsen. He is survived by his wife of 4 years, Jane Freestone of Mesa, children Pam (Steve) Patience and Karen (Rich) Gulbrandsen. He has 9 grandchildren and 10 great-grandchildren. He loved dogs and has had many. He had a great love for his family and was very generous. He was strong both mentally and physically until his passing. He was greatly loved and will be missed by many. Visitation will be Friday, December 14, 2012 from 6-8 PM at Bunker’s Garden Chapel, 33 N. Centennial Way, Mesa, AZ. Funeral services will held Saturday, December 15, 2012 at 10 AM at the Ridge Ward, 2220 N. Harris, Mesa, AZ, with visitation at 9 AM. Interment at City of Mesa Cemetery.