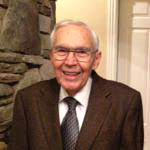 William “Bill” Albert Thomasson was born on November 24, 1928 in Douglas, Arizona and passed away on March 20, 2019 in Gilbert, Arizona. He was the youngest of four children born to Samuel Lewis Thomasson and Wonnie Elois Weeks Thomasson. Bill attended Arizona State University in Tempe, AZ where he earned a Master of Education degree and met Pearl Jeanette Salmons, whom he married on August 13, 1949. Bill and Jeanette were baptized into The Church of Jesus Christ of Latter-day Saints on March 3, 1951. They were sealed in the Mesa Arizona Temple on February 19, 1953. Bill was married to Jeanette for 52 years, until her passing in 2001. He is survived by his six children, Steve (Glenda), Susan (Richard) Turley, Stan (Karen), Shirley (Steven) Bowles, Sam (LaWana), and Sara (Carl) Krueger; 24 grandchildren; and over 30 great-grandchildren.

Bill was a hard worker. To support his growing family, he worked for Salt River Valley Water User’s Association (now known as Salt River Project), AirResearch (now known as Honeywell), and he worked as a school teacher in Pima, AZ, Yuma, AZ, and Fredonia, AZ early in his teaching career. Bill ultimately settled in Phoenix, AZ and was an industrial arts teacher at North High School in Phoenix, and the Area Vocational Center at Phoenix Union High School. He was creative and could fabricate, machine, or repair just about anything. To supplement his teacher’s salary he taught drivers education, did stonework and worked construction, worked for the Forest Service, and even drove an ice cream truck.

Bill was involved heavily in his church and served as Scout Master, Young Men’s President, Financial Clerk, and was even in a branch presidency on the Piute Indian Reservation. He also served at the LDS Family History Center for over 10 years and in the Mesa Temple for over 20 years.

Bill was a devoted father who was kind, yet firm in his convictions, and he taught his children the value of work, family, and their relationship with God. He was selfless, and there was no end to the sacrifices he would make for his children or their education. He is loved and will be dearly missed.

A funeral service will be held at 10:00am on Wednesday, March 27, 2019 at The Church of Jesus Christ of Latter-day Saints – Elliot Ward, 234 North Greenfield Road, Gilbert, Arizona 85234, with a visitation beginning one hour prior to the service at 9:00am.