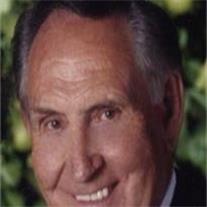 Wilford Parley (Whizzer) White peacefully returned home to his Heavenly Father on Thursday, August 1, 2013 at the age of 84. He was born September 26, 1928 to Isham Erdy White and Annie Belle Garner in Mesa, AZ. Wilford owned the Mesa Merchant Police, founded by his father in 1938. He was a faithful member of The Church of Jesus Christ of Latter-day Saints and served in many callings throughout the years. Wilford excelled in four sports while attending Mesa High School and was Arizona State University’s first All-American in football. He went on to play professionally for the Chicago Bears. He is survived by Shirley Merrill White, his high school sweetheart and wife of 62 years; his children: Danny White (JoLynn), Teresa Yetter (Rich), Tammy Malone (Scott), Cristall Hall (Mark), Chad White (Michele); 26 grandchildren and 42 great-grandchildren. He is also survived by his siblings Edward White, Erleane Webb and Dixie Solomon. A visitation will be held Wednesday, August 7, from 6-8 PM at Bunker’s Garden Chapel, 33 N. Centennial Way, Mesa, AZ. Services are Thursday, August 8, at 10am at the Church of Jesus Christ of Latter-day-Saints, 933 E. Brown Rd., Mesa, AZ with visitation starting at 9am.