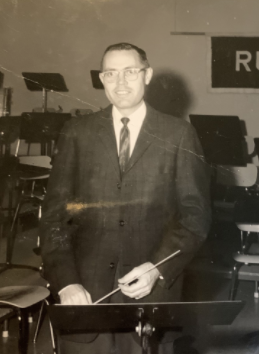 Wendell Emery Tompkins, 88, of Tempe, AZ, gained his eyesight and saw his Lord and Savior on Saturday, July 4, 2020.  He left his earthly home peacefully with his wife by his side.

Wendell was born in Mapleton, ME, on January 3, 1932, to Elmer M. and Adeline (Bull) Tompkins.  He graduated from Mapleton High School in 1949 and from Bob Jones University in 1953 with a degree in music education.  Wendell began his teaching career in Easton, ME, where he taught K-12 music for 3 years before being drafted into the US Army.  Starting out at Fort Dix, NJ, Wendell eventually ended up at Fort Story, VA, where he was the clerk typist for the sergeant major.  During this time, he learned to play the organ, directed the chapel choir, and sang in an award-winning barbershop quartet.  While home on leave, he reacquainted himself with Betty Barton, whom he later married.  In February of 1958, stomach surgery led to a medical discharge from the army.

On August 5, 1958, Wendell and Betty became husband and wife.  They lived in Easton, ME where Wendell resumed his teaching for the next 3 years.  He then taught at Stearns High School in Millinocket, ME; Stephens/Rumford High School in Rumford, ME; Clinton Christian School in Upper Marlboro, MD; Tri-Cities Christian School in Blountville, TN; and Tri-City Christian Academy in Chandler, AZ where he retired from teaching in 1994.  He was responsible for launching several highly successful band programs across the country. His encouragement led many students to continue developing and using music throughout their lives. Following his retirement, Wendell worked in the garden center at Walmart in Mesa for 11 years.

The family would like to express gratitude to the hospice team from Banner Health who graciously assisted in caring for Wendell in his final days.

Public visitation with the family will be on August 6, 2020 at Tri-City Baptist Church, 2211 W. Germann Road, Chandler, AZ, 85288, from 5:30 – 6:45 PM, with a memorial service to follow at 7:00 PM.  In lieu of flowers, please consider donations in Wendell’s memory to Bob Jones University, Greenville, SC; International Baptist College and Seminary, Chandler, AZ; or, The Wilds of New England, Deering, NH.  Interment will be at the National Memorial Cemetery of Arizona, Phoenix, AZ.