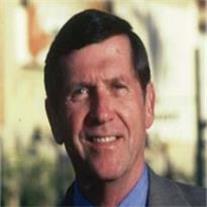 The Honorable Wayne Brown of Mesa passed away Tuesday, May 14, ending a long battle with hemorrhagic strokes. Born in Mesa November 16, 1936, he served on the Mesa City Council from 1968 to 1976 and as Mayor from 1996 to 2000. When serving as Mayor, Brown and his City Council persuaded voters to pass a one-half cent Quality-of-Life Sales tax supporting police, fire, parks and library services as well as the construction of the Mesa Arts Center, which he viewed as his greatest achievement as Mayor. Mayor Brown was a Mesa High School graduate and earned his bachelor’s degree in accounting from Arizona State University. He worked in public accounting and founded a Mesa CPA practice, Wayne Brown & Company, where he worked until 1978. He purchased Brown Evans Distributing Co., a wholesale fuel distributor, in the early 80’s. Wayne led a very happy, active life filled with family, friends and many activities such as golfing, flying, fishing and traveling. He is the son of Bert and Elva Brown of Mesa. Wayne is survived by his wife of 33 years Kathye; his mother Elva; his daughter Elizabeth and her husband Wade Solomon; his son Martin Wayne and wife Steffani; his son Kent and wife Melisha; his twin brother Duaine and younger brother Henry; grandchildren Cliff, Sarah, Brock and Hannah Solomon and Jeff, Jessalyn, Kalie, Kendall, Maci, Nick, Tyler, Dallin, Spencer, Aubree and Emily Brown; and three great grandchildren. Funeral services arranged by Bunker’s Garden Chapel, are scheduled for Saturday, May 18, at 9:00 a.m. at the LDS Church at 1100 N. Cooper Rd. Gilbert, AZ 85233 and will be followed by burial at the Mesa Cemetery.In lieu of flowers, please consider a memorial contribution to United Food Bank, 245 South Nina Dr., Mesa, AZ 85210, www.unitedfoodbank.org.