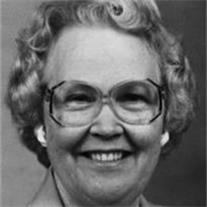 GUTHRIE, Wanda Knudsen of Gilbert, beloved wife, mother, grandmother, and great grandmother, died in Mesa, AZ on July 30, 2011 at age 83. She was born in Phoenix on August 5, 1927 to Niona (Lamb) and Warren Knudsen, members of pioneer ranching and dairying families in Arizona and New Mexico. Wanda was the eldest of eight children. She was an outstanding student in Bluewater, NM, Gilbert and Mesa, AZ schools, graduating from MUHS in 1945. For many years her special high school friends have remained in touch and periodically met in reunions. Those friends included Charmaine Guthrie Halversen, Rosalie Nichols Woods, Shirley Ollerton Buck, Marian Bond Mulkins, Clara Cluff Tryon, Frankie Robson Decker, and Marian Haws Pew. In her senior year she remembers getting up early to help milk several cows before riding 3½ miles on her bicycle to school to attend an early morning Seminary class. Several days a week after school she walked downtown to the Woolworth store and worked for 2 hours at 35 cents per hour. During her junior and senior years she was the accompanist for Acapella and other chorus classes. Wanda met Glenn Guthrie on April 18, 1945. He was home on leave after his aircraft carrier was badly damaged with a heavy loss of life while supporting the marine invasion of Iwo Jima. Theirs was a great love story as they courted for 21 days before Glenn went back to the Navy. They wrote to each other every day for 6 ½ months. On November 15, 1945, Wanda and Glenn were married in the LDS Arizona Temple. Always active in the Church of Jesus Christ of Latter-day Saints, Wanda gave much service in many different assignments. She particularly enjoyed those involving music. Twice she worked as Relief Society President of her ward. She has contributed greatly to the family histories and life stories of her family and forebears. She and Glenn served a mission at the Family History Center in Mesa. Glenn and Wanda are the parents of six children: Anna Jean (Royce West) of Gilbert, Catherine (Dennis Vance) of Puyallup, WA, Marlene (Robert Elliott) of Gilbert, Steve (June) of Casa Grande, Dale (Jo Ellen) of Gilbert, and Wayne (Kathy) of Mesa. Wanda was preceded in death by her parents and two sisters, Verna Bunnell and Carolyn Wright. She is survived by her husband Glenn, their six children, 31 grandchildren, 45 great-grandchildren. She is also survived by siblings, Wendell (Tricia), Marvin (Margaret), Benny (Willa), Ronald (Betty) and Sherry (Joel Foutz). The family expresses appreciation to Sharon and Steve McRae and helpers at the Golden Age Care Home for their kindnesses and loving concern for Wanda. Also, we remember Hospice of the Valley and especially Wanda’s special friend Teresa. Services will be held Saturday, August 6, at the Catalina Ward building, 1520 S. Catalina, Gilbert, at 10 AM with a viewing at 9 AM. (1/4 mile west of the Gilbert Road-Ray Road intersection) A viewing will also be held on Friday at Bunker’s Garden Chapel, 33 N. Centennial Way, Mesa, from 6 – 8 PM. Interment will be at the City of Mesa Cemetery.