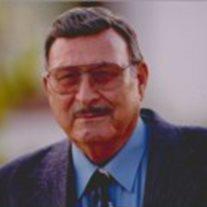 By the time he was done living on March 29, 2014, Walter Lyman Haws 94 had left the world a little more beautiful and a little warmer.

Lyman was born in Gilbert, Arizona, in 1919, seven years after Arizona was granted statehood. He was called by President Heber J. Grant to serve a two year Mormon mission in the Northwestern United States mission. Except for his mission and a tour of duty in the Pacific as a WWII medic, Lyman never lived outside of Mesa and Gilbert, AZ.

He didn’t preach much. Instead, his life was a sermon on consistency, patience, and an increasingly softening heart. For over 40 years he showed up to work at the Haws Flower Shop, which he founded. He has hundreds of Grandkids (and scores of Greats and Great-Greats). Most of them will remember some variation of a brown outfit, nature walks behind the Hawsienda in Greer, and a ticklish mustache… He only shaved the mustache once he became a worker in the Mesa Temple (which commenced construction the year he was born).

After his mission, Lyman married Rhoda Farnsworth. Together, they settled in Mesa, and gave life to Laura Gunnell, Marilyn Barnes Merrill, Walter Lyman Haws Jr, Carol Hatch, and Jerri Mabry. The kids would call him “Daddy” from the time they could speak till the day he passed away while they surrounded his bedside. The Haws girls all got their mother’s beautiful high cheekbones and their fathers gift of looking much younger than they are. He lost Rhoda suddenly to a car accident.

He remarried Mary Ferrin and they gave life to Echo Itaaehau who shared her sisters’ gift of youth and got her mother’s love of education. He also helped raise Mary’s children Merrilee Beals, Marshall Martin, Mike Martin, and Mark Martin.

After many years together, Mary passed away. He married Marilyn MacDonald (he loved Marilyn’s children; Jeff Cottrell, Dan Cottrell, Becky Clarke, Donna Allen, Tom Cottrell, and Dave Cottrell) and together they spent their golden years… years inaugurated by a 10k run with his daughters when he turned seventy. Five years later Lyman discovered quilting and spent years in his garage quilting for free. He loved the thought of his quilts warming a suffering child. Most of his grandchildren also have a quilt made by Grandpa Haws.

His laugh was a few brief, memorable, chuckles and he loved to tell the unexpected joke. He loved America and freedom. He mowed his own lawn into his 90’s.

He renewed his AZ drivers license when he was 92 years old.

Lyman Walter Haws passed away, but the world is a little better because he lived.

A funeral service will be held at 11:00 AM, Friday, April 4, 2014 with a Visitation one hour prior at The Church of Jesus Christ of Latter-day Saints, Signal Butte 1st Ward, 1720 S. Ironwood Drive in Apache Junction.