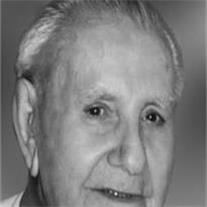 Walter Keith Johnson passed away November 5, 2009 just 9 days short of his 91st birthday. He was surrounded by his children Jerry and Karen, R. Wayne and Leslie, Jim and Jeanene Hamman, Terry and Darlene Williams, and Larry and Joetta Bond. Walter Johnson lived in Mesa his entire life. He served his country in the military in Europe during World War II. A lifelong member of the Church of Jesus Christ of Latter-day Saints, he served in many positions of responsibility with dedication and humility. He considered his most important calling and accomplishment to be that of husband, father, grandfather, and great grandfather. He was anticipating welcoming his first great-great granddaughter in December. Walter was the most tender and loving care-giver to his wife Pernie, his cherished wife of sixty-two years. After she passed away in 2001, he continued to live in their home where he has been the source of loving support, guidance, and example to his family and friends. He endured the challenges of age with his usual gracious acceptance, good humor, patience, and submissiveness. His life reflected that of the devoted disciple who loved his Father in Heaven, his Savior, his family, and all who crossed his path. We celebrate the life of this good man, Walter Keith Johnson, and his legacy of faith, love, and gentle determination to finish the course well. He is survived by his five children and their spouses, 27 grandchildren, and 89 great grandchildren. A viewing will be held Sunday, November 8th from 6-8 p.m. at Bunker’s Garden Chapel, 33 N. Centennial Way, Mesa. Funeral Services will be held Monday, November 9th at 10:00 AM at the Pueblo Stake Center, 2334 East Pueblo, Mesa, with a viewing one hour prior.