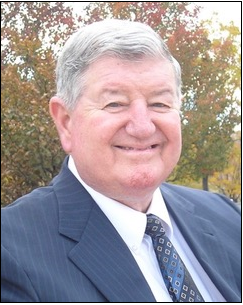 Wallace Martin McCook, age 81, passed away August 30, 2022. He was born in Santa Ana, CA, on June 5, 1941, the second child of Hazel and R.L. McCook, Jr. A member of The Church of Jesus Christ of Latter-day Saints, he remained faithful in his testimony throughout his life.

On April 18, 1963, Wally was married and sealed to Mary Lee Nelson in the Los Angeles California Temple. They made their home in Tempe, AZ and raised a family of six children. Wally’s focus was as husband and father. He and Mary reared their children in love, yet prioritized time spent together traveling, going for walks, swimming, and studying the gospel. Wally was an entertainer and loved to tell funny jokes, share good stories, and do magic tricks, always with a contagious smile on his face.

Wally was trained in the boiler business by his friends at Parker Boiler Company, also while working alongside his dad. Later, as President of McCook Boiler Company, he provided well for his family while working with his brothers and sons. His children learned the value of work, and when Wally retired after over 45 years in the industry, his son continued the legacy of the family business.

In retirement, Wally attentively cared for Mary until her passing in 2018. He later reconnected with a friend from high school, Diane Dana, who brought comfort and companionship. On October 17, 2020, they married in Tempe, and were sealed in the Tucson Arizona Temple on December 5, 2020. His devotion and love for Diane and her family blossomed.

Wally found such joy in sharing the gospel! He served a two-year mission in the British Isles, an eighteen-month Family History Mission with Mary in Salt Lake City, UT, and nine years as Secretary to the Arizona Tempe Mission Presidents. He also served as Bishop of the University 2nd Ward on the campus of Arizona State University. Wally spent his life loving, sharing, and inviting others to Christ.

Friends and family are invited to a celebration of Wally’s life on September 16, 2022, at 7:00 pm at The Church of Jesus Christ of Latter-day Saints, 2549 N 32nd St, Mesa, AZ. Interment was held September 3, 2022, at the Mesa City Cemetery. The family wishes to thank Hospice of the Valley for their tender support and care.