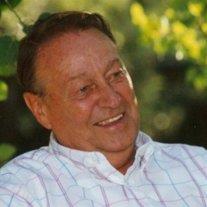 W. James “Jim” Winspear, age 90, passed away January 3, 2014 in Mesa, Arizona. He was born February 20, 1923 in Buffalo, New York. Jim had a career in retail and manufacturing. He served in the US Navy Air Corp from 1942 to 1945. Jim enjoyed fishing and was an avid sports fan. He served twice as a bishop for the Church of Jesus Christ of Latter-day Saints. He was preceded in death by his wife of 55 years, Louise Chambers Winspear, his parents, James Wallace Winspear and Elizabeth Anna Dodd Winspear, and two brothers, Jack Winspear and Burt Winspear. He is survived by his five children and their spouses: Marcie and Michael Patch, Linda and Bill Call, Rand and Victoria Winspear, Joel Winspear, Christopher and Gina Winspear. He is also survived by 23 grandchildren, 37 great-grandchildren and 2 great-great-grandchildren. A memorial service will be held on Saturday, January 11, 2014 at 11 AM at the LDS Park Center Ward Chapel, 422 E. University Dr., Mesa, Arizona. Arrangements by Bunker’s Garden Chapel.