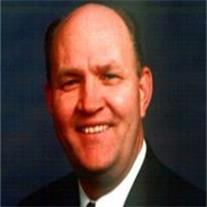 W. Harley Jarvis of Mesa, Arizona passed away on July 31, 2011 after a long and valiant battle with Alzheimer’s disease. Harley is survived by his wife of 45 years, Betty Ann Jarvis and their six children: sons, Harley (Jill), James (Christy), and Steven; daughters, Jennifer Godfrey (Don), Julie Bradford (Paul), Joy Thayne (Jason); and 21 grandchildren. He is also survived by his mother Opal Hopps of Mesa, Arizona; four brothers; Larry, David, Randy and Keith; and two sisters; Sheila Hall and Elaine Ray. Harley was born to Warren Lake Jarvis and Opal Fuller Jarvis (Hopps) on December 25, 1943 and was raised in Mesa, Arizona. He attended Mesa public schools and graduated from Mesa High School in 1962. Harley completed one semester at Arizona State University before serving a two-year, LDS mission to Eastern Canada. Harley returned to ASU in 1965 and married Betty Ann Ellingson in the Arizona Temple on July 26, 1966. He received a Bachelor of Science Degree in Accounting in 1968 and received a Juris Doctors Degree from the ASU College of Law in 1971. Harley was a member of the State Bar of Arizona and the American Bar Association. He joined the Lybrand Ross Brothers and Montgomery firm in the Newport Beach, CA office in 1971, then served as Trust Officer for the Arizona Bank and ended his career in 1995 as an estate planning attorney with Kempton, Jarvis, Decker, Jenkins and Walker. Harley was a member of the Mesa Baseline Rotary Club and served a term as president. He was a long time supporter of the Boy Scouts of America and received special recognition for his service in 1990. Harley was a devoted member of the Church of Jesus Christ of Latter-day Saints and treasured his testimony of the restored gospel, the Savior and his Heavenly Father. He served in many callings in the Church including his favorite assignment as Bishop of the Grandview First Ward from 1990-1995. He loved people and loved seeing them happy. Harley will be remembered for his loving relationships and faithful service. Visitation will be Friday, August 5, 2011 from 6-8 PM at Bunker’s Garden Chapel, 33 N. Centennial Way in Mesa. Funeral services are Saturday, August 6, 2011 at 10 AM, preceded by a visitation at 9 AM at the LDS Grandview 1st Ward, 1455 N. Harris Dr., also in Mesa. Interment will be at the City of Mesa Cemetery.