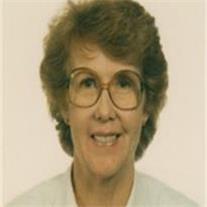 Born August 22, 1921. Died August 9, 2013. Raised in Los Angeles, Virginia briefly attended UCLA then left home at 17 to pursue a career as a ballet dancer. Her career took her to Chicago, Philadelphia and finally to New York City where she danced with the Radio City Ballet Corps. While in New York she met and married a young naval officer from Arizona, J. LaMar Shelley. After WWII they settled in Arizona, first in Tucson while LaMar attended Law School, then in Mesa to raise a family. Six children came, Carol Boyle, Marlene (Robert) Tolman, Jana (Gunn) McKay, Mary (Mark) Hutchings, Gerald (Carmen) Shelley and James (Hollie Lavenstein) Shelley. In Mesa, Virginia ran the Shelley School of Ballet and was involved in other local fine arts organizations. Named Mesa’s Woman of the Year 1983, she was later appointed by the governor to serve on the Arizona Commission for Fine Arts. She taught ballet until her 90th year. Steadfastly devoted to her faith, she is survived by her children, 29 grandchildren and (at this count) 33 great grandchildren. A viewing will take place Friday, August 16, from 6 to 8 pm at Bunker’s Garden Chapel, 33 N. Centennial Way, Mesa, with funeral services to occur Saturday August 17, at 11:00am at the LDS Chapel, 1054 W. 2nd Place, Mesa. In lieu of flowers, please make a donation to your favorite charity, although Virginia would smile on a contribution toward one in the fine arts or to the Perpetual Education Fund.