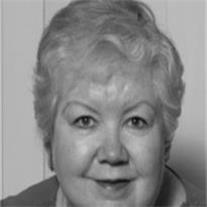 Vickie Lynn Jensen Swain, 58, passed away peacefully at her home in Mesa, Arizona on June 9, 2013. She was born at the Army base in Tooele, Utah in July of 1954. After her father completed his tour of duty in the Army, having served courageously in Korea, her family alternated their time between living in Southern California and Phoenix. She graduated from East High School in Phoenix in 1972. Vickie enjoyed her family, friends, house boat trips to Lake Powell and going to the movies with her best friend Teresa. She also served faithfully in her church in Primary, Young Women’s and Relief Society. She was a friend to all and was always looking for a way to lighten the load of others. Vickie was preceded in death by her father, William Duane Jensen, her step-father, Rosario Porto, and her two sisters Angela and Karen. She is survived by her mother, Marion Jo Porto, her husband of 41 years, Scott Swain, all 6 of her children, April Wolanin (Randy), Holly Phelps (Brandon), Tammi Adolpho (Johnny), Daryl Swain (Yara), Jolene Selover (Jeff), Jeffrey Swain and 18 grandchildren with number 19 on the way. There will be a viewing at Bunker’s Garden Chapel, 33 N. Centennial Way, Mesa, AZ between 6 & 8pm Thursday, June 13. Funeral services will be at the LDS Mesa East Stake Center at 2228 E. Brown Rd. in Mesa at 10am Friday on June 14, with viewing an hour before the services. Interment will immediately follow at Green Acres Mortuary & Cemetery, 401 N. Hayden Rd. in Scottsdale.