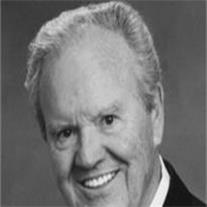 Send Photo of Vernon B. Watkins

Vernon Bowring Watkins died December 23, 2010 in Mesa, AZ. He was born January 22, 1927 to Nola Bowring and Norman V. Watkins in Brigham City, UT. He married Bonnie Jean Taylor July 15, 1948 in the Logan, UT Temple. She died March 13, 2002. He married Joyce Blain May 18, 2006. Vern was a veteran of World War II, serving in Germany. Vern graduated from Utah State University and completed a Master’s Degree in Education at Oregon State University in Corvallis, OR. He and Bonnie moved to Phoenix in 1952 where he was a guidance counselor at the newly-opened Camelback High School. Vern was later employed by SRA and IBM providing educational materials and training to schools in the Intermountain West and Hawaii. He was a life-long member of the Church of Jesus Christ of Latter-day Saints, serving faithfully in many capacities. He served as Bishop of the Phoenix 11th Ward and later served as President of the Phoenix East Stake. With wife Bonnie, he presided over the Texas Houston Mission from 1990-1993. Vern loved their missionaries and loved having contact with many in his later years. He was a counselor in the Mesa Arizona Temple presidency and treasured the service and friendship of patrons and temple workers. Vern was an ordinance worker and sealer for 17 years in the Mesa Arizona Temple. He also cherished his many years as a member of the Phoenix East Stake and the Mesa Arizona Kimball East Stake where he resided at the time of his death. Vern is survived by his wife Joyce, and children Connie (Lothaire) Bluth, Norm (Suzanne) and Lori (Dennis) Headley. Stepchildren are Claudia S. Blaine and Brenda Blaine. Vern is also survived by 13 grandchildren, 23 great-grandchildren, 3 step-grandchildren and 5 step-great-grandchildren. Two of his three brothers survive; Norman of Highland, UT and Richard (Paula) of Mendon, UT. His brother Jack preceded him in death and sister-in-law Vanja of Salt Lake City, UT survives. Vern dearly loved his nieces, nephews and cousins. Family was everything to him. He loved the gospel of Jesus Christ and lived a life exemplary of his Savior. Vern was gracious and kind–he genuinely cared about everyone he met. He continually looked for the good in people, and he always found it. We will miss his kind smile, encouraging words, playful laugh and his big heart. Funeral services will be held at the Kimball East Stake Center, 4640 E Holmes, Mesa, AZ at 11:00am on Friday, December 31, 2010. A viewing will be held prior to services at 9:30am. A viewing will also be held at Bunker’s Garden Chapel, 33 N Centennial Way, Mesa, AZ from 6-8 pm on Thursday, December 30, 2010.