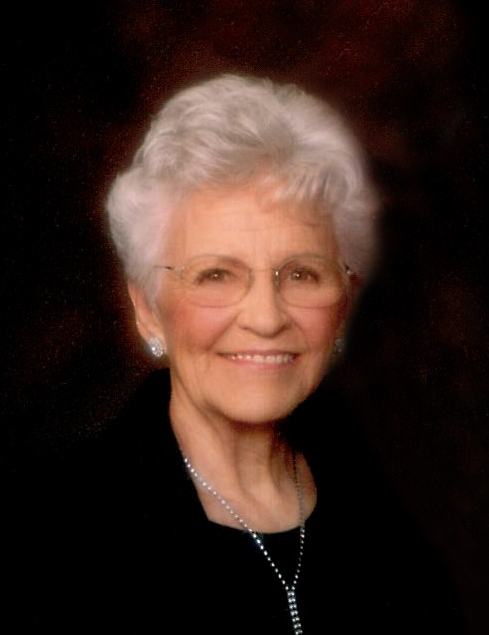 Verla Bingham Hickman passed away on February 18, 2019, in Mesa, AZ.  Though we sorrow to be away from her for a season, we celebrate her life and her joyful reunion with her husband Winston, all her siblings, and her parents.

Verla Bingham Hickman was born on June 21, 1922—“the first day of summer, and the longest day of the year,” as she would later say—in Ogden, Utah, to her parents Norman Fife Bingham and Ellen Garner Bingham.  The youngest of six children, Verla lived briefly in Perry, UT, and View, ID, but spent most of her childhood and teenage years in Ogden, UT, where she thrived.  During her time at Weber State College in 1942, she went on a first date on Valentine’s Day with Winston Hickman (“Bud,” as friends and family called him), a young man she had known casually at Ogden High.  Soon she was wearing Winston’s Excelsior pin and never dated anyone else.  They married on May 8, 1943, in Stillwater, Oklahoma, and then were sealed in the Logan Utah Temple on July 7, 1944.

Verla and Winston moved frequently during their first years of marriage while he served in the U.S. Air Force during World War II, with stops in Chickasha, OK; Coffeyville, KS; Pueblo, CO; and Frederick, OK.  After Winston returned from the war, he and Verla moved to Salt Lake City, UT, so that Winston could complete his degree in mechanical engineering at the University of Utah. They then spent three years in Borger, TX, while Winston worked for Phillips Petroleum, but for most of their married years they lived in Idaho Falls, ID, where Bud worked at the National Reactor Testing Station and Verla focused on raising their children Larry, Craig, Deborah, and Mark.  At the end of her life, Verla would call “being a mother and raising four wonderful children” her “greatest accomplishment,” something evidenced by the countless hours she spent making their three different homes in Idaho Falls cozy and comfortable and filling her children’s and husband’s lives with happiness.  Verla also dedicated herself to fulfilling a variety of callings in the Church of Jesus Christ of Latter-day Saints and to serving in different capacities in the community.

Verla and Bud served a mission for the Church of Jesus Christ to northern California, after which they relocated to Utah and spent much of their retirement in Springville, UT, and then in South Jordan, UT.  After Bud’s passing, Verla followed her beloved daughter Debbie to Arizona where Debbie lovingly cared for her during the final few years of her life.

Wherever she lived, Verla made friends, from her time playing kick-the-can as a child in Ogden to her years as a student body officer and pep club member at Ogden High and finally to the various different places she and Bud lived over their 72 years of marriage.  Even in Verla’s last years at the assisted living center where she and Bud lived, it was difficult to walk quickly with her down the facility’s hallways because of all of the people who would stop and want to visit with her.  Verla filled others with light and quickly expressed her love for her family and friends, often accompanied with hugs, tears, and usually a sweet treat or two.  In this manner, Verla exemplified one of her favorite scriptures: “Wherefore, ye must press forward with a steadfastness in Christ, having a perfect brightness of hope, and a love of God and of all men” (2 Nephi 31: 20).

Verla is survived by her four children, Larry, Craig, Deborah, and Mark, and thirteen grandchildren and many more great-grandchildren.  She was preceded in death by her beloved husband Winston, the “star of her life.”  She will be buried next to Winston in the Ogden City Cemetery in Ogden, UT.

Funeral services will be held at the LDS Lorin Farr 6th Ward Building, 770 15th St., in Ogden on Saturday, February 23, at 1 p.m with a viewing at noon.