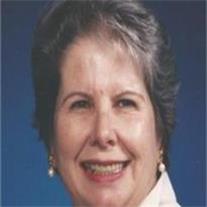 Poole, Velma Sue (Brundrett), “Sue”, 80, of Sun Lakes, AZ died Friday, October 25, 2013. Sue was born in Galveston, TX to Susie Howe and Charles M. Brundrett on July 1, 1933. She lived in Texas until her marriage to James “Jim” Poole in 1957. They lived for a number of years in San Diego, CA, a short time in Louisiana, and back to Southern California before retiring to Sun Lakes in 1994. She is preceded in death by her parents, brother & nephews. She is survived by her husband Jim, children Kelly Bogda (Mark) of Missouri, Jon Poole (Kathleen) of Virginia, and Lisa Stenger (Jeff) of Illinois, her brother Leon Brundrett (Pat) of Texas, and seven grandchildren, Melissa, Kristin, Carly, Kenny, Ricky, Kyle & McKayla. A private burial will be held on October 29, 2013, with a Celebration of Life service at a later date. In lieu of flowers, the family is requesting that donations be made to the Alzheimer’s Association. Arrangements by Bunker’s Garden Chapel.