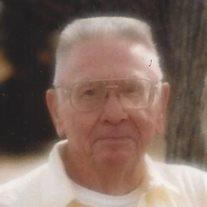 Vance G. Chapman 87, born on May 22nd 1927 in Flint Michigan passed away peacefully at the hospital with his loving family by his side in Mesa Arizona on July 21st 2014. He joined the Navy at an early age to help defend our great country and was a proud WWII veteran. Vance and his wife Mary Lou moved their family from Flint, Michigan to Mesa, Arizona in 1959 where he continued his proud career as a Union Bricklayer and eventually served as the Business Agent for Local #3 in Phoenix AZ. Vance was a 32nd degree Mason at the Oriental Lodge No. 20 in Mesa AZ. Vance was preceded in death by his wife Mary Lou. He is survived by daughter, Sandra Moody (David), son, Vance G. Chapman Jr. (Rebecca), 7 grandchildren and 11 great-grandchildren. Memorial Services will be held at Bunker’s Garden Chapel, 33 N. Centennial Way, Mesa, AZ on Friday August 1st at 11 AM. In lieu of flowers you may donate to Wounded Warrior Project if you so choose.