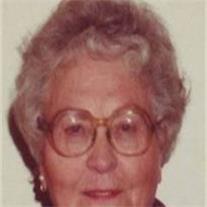 Ula was a descendant of early, Arizona pioneer families and the youngest of the 13 children of Wesley and Lillian (Bushman) Palmer. She graduated from Mesa High School and lived in Mesa through early adulthood then, having lived in many locations throughout the United States, she returned to spend her final years in her beloved hometown.

As a daughter of early Mormon settlers and farmers, Ula venerated their values and traditions and tried to pass them on to her children and others.

Ula and Kenneth were married in the Salt Lake City temple of The Church of Jesus Christ of Latter-day Saints and remained an active member of the Church throughout her life.

Ula loved to sing. She sang in the BYU A Cappella Choir and was a member of the Arizona Mormon Choir for 9 years.

Ula was employed as a secretary for 16 years by the Detective Division, Phoenix Police Department where she retired in July, 1990. The detectives loved her and called her “Mom.