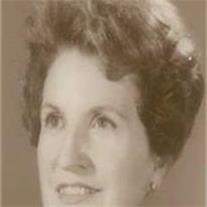 Trilba Claridge Gherkins passed away on Sunday, September 6, 2009 in Mesa, Arizona surrounded by her family at the age of 95. Services will be at 10 a.m. Friday September 11, at the Church of Jesus Christ of Latter-day Saints, Kensington Ward Chapel, 3345 E. McLellan in Mesa. Visitation will be one hour prior to the services at the church. Burial will be in Thatcher Cemetery in Thatcher, Arizona Cemetery at 3:00 p.m.

Trilba was born to Edward Claridge and Lillian Layton in Thatcher, Arizona on August 3, 1914. She was one of 7 children born to this union all of which are deceased. She married Glenn Gherkins in Los Angeles on Feb 16, 1935. They are the parents of three children, Carol Cooper Wisdom, John Gherkins, and Marilyn Faulkenberry, all of which have preceded her in death. Trilba lived her early life in Solomonville where she attended grade school and then at Safford and the Gila College in Thatcher. She furthered her education at the U of A and later at UCLA. After her marriage to Glenn, they lived in Southern California, where she practiced interior design for many in the area. They returned back to the Solomonville area where they lived for many years before moving back to Southern California. They also spent many years in Northern California before moving to the Mesa area where her husband Glenn passed on February 21, 1990. She served in many position in the Church of Jesus Christ of Latter-day Saints, and had a strong testimony of the gospel. She was also called as a temple worker in Mesa LDS Temple. She is survived by 13 grandchildren, 38 great grand children and 3 great-great grandchildren.