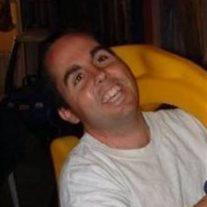 Thomas Kevin Jackson was born on June 2, 1973 in Salem, Oregon and passed away on February 13, 2014 in Mesa, Arizona after a long battle with liver disease and very recently, lymphoma. Kevin was diagnosed less than two years after marrying Kerri Smith Jackson on August 1, 1998. After the diagnosis, he continued on in his ever optimistic way and started a family. He went back to school and completed his Bachelor’s degree and began law school before becoming very ill and needing a liver transplant, which he received in September of 2010. He was diagnosed with stage four non-Hodgkin’s Lymphoma in early January 2014. He is preceded in death by his mother Gail. He is survived by his father, K.Arnold “Jack” Jackson, his wife, Kerri and his three children Katelyn – 11, Calvin – 7, and Ashley – 5. He is also survived by his sister Ruby (Mike) Moore, Boyd Jackson, and Victor (Kyoko) Jackson, and many nieces and nephews. His sense of humor, positive attitude, and laughter that touched so many will never be forgotten.
Services for Kevin will include a closed casket visitation at 9:30 am before the 11 am funeral service on February 21, 2014 at the LDS Church, located at 1111 E. Knox Rd in Tempe, AZ. In lieu of flowers, Kevin asked that monetary donations be made for the children at Wells Fargo, The Kevin Jackson Memorial Fund. Arrangements by Bunker’s Garden Chapel.