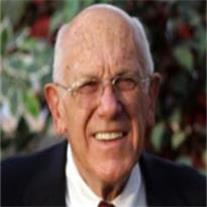 He is survived by his wife, Cheryl and his three sons Tom Jr (Kimberly), Rory (Lori) and Burke (Elizabeth). He is also survived by his six step-children: Carrie Walden (Bill), Scott (Jennifer), David (Jamie), Paul, Deanna Chesley (Marc) and Shauna Benson (Chris). Tom is survived by 34 grandchildren and 4 great grandchildren. He is preceded in death by his first wife Betty, and daughter Roxanne.

He lived most of his life in his beloved state of Arizona. He served Winslow as their mayor for two terms. Throughout his life he was an active scouter. He served as president of the Grand Canyon Council and received the Silver Beaver award. Tom’s career was spent in the retail business. He owned a chain of small family “Whipple