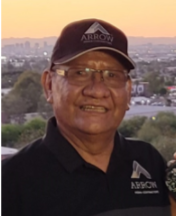 Thom Curleyhair, age 65, of Fountain Hills, AZ, passed away February 2, 2022 surrounded by his family in Scottsdale, AZ due to complications of COVID.

Thom was born October 10, 1956 in Ganado, AZ to Kitseelie Curleyhair and Mary Ann Etsitty. He was the 4th of 7 children. He attended grades K through 6 at the Indian Boarding School in Kayenta, AZ. From 1969 to 1971, he participated in the LDS Indian Student Placement Program where he lived with the Newel K and Pauline Palmer family of Mesa, AZ. It was within this home that his testimony of Jesus Christ was fortified and grew. There he attended 8th & 9th grade at Carson Jr High School. He spent his senior year back in Kayenta attending Monument Valley High School where he met the love of his life and future bride, Sheila Bostwick.

After high school Thom joined the Marine Corps where he served for four years as an Amphibious Vehicle Crewman. After being honorably discharged he returned home to Kayenta where he married Sheila and began working for Peabody Coal Company. It was at the coal mine where Thom began running heavy equipment and building roads. His passion for machinery and moving dirt grew and developed into a desire to one day have his own construction company.

In 1986 Thom and Sheila moved from Kayenta to Mesa, AZ where they would raise their six children. In 1992 they incorporated their small construction company, Arrow Indian Contractors, Inc (Arrow). Success did not come overnight, and the company experienced many ups and downs but eventually it grew and has become a robust general contracting company with many wonderful employees. Many of the roads built and much of the work performed by Arrow has been on the Navajo Nation, the homeland where Thom felt a strong connection to the land. In 2019 he accepted a position with the Dine’ Chamber of Commerce as vice chair where he hoped to help his fellow native Navajo people with their desires to prosper in their own businesses.

Thom had a generous heart and was often helping others. He also touched many lives as he shared his testimony and love for his Savior Jesus Christ. His strong faith is what saw him through his battle with nasopharyngeal cancer and sepsis in 2021 and what gave him courage as he faced his battle with COVID.

Thom is preceded in death by his parents Kitseelie and Mary Ann, an older sister Gesi’ and younger sister Lucy.

Funeral Service will be Live Streamed at: https://youtu.be/Yc-tkk-RjBw