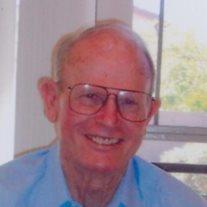 Ted H Carpenter, beloved husband and dad, returned to his Heavenly Father on July 22, 2014. He had been a resident of Mesa since September 1994.

Ted was born on May 17, 1926, in Pima, AZ, to James Harley and Gladys Maloy Carpenter, the 2nd of five children and quite a few foster children. His older sister Ruth Crabtree (Graydon) preceded him in death. Ted is survived by his sister Bonnie Gregg of Safford, AZ, two brothers, Doug (Barbara) of Pima, and Dan (Peggy) of Gilbert, and two foster siblings Uleta Duncan and Dorice Cheschilly.

Ted enlisted in the Navy at age 17 during World War II on May 13, 1944, and served until June 10, 1946 for a total of 2 years and 28 days. He was with the Hedron FAW Eight, USNAB Navy #807. First he was a chauffeur for a captain on a base in California. He was then sent to the Marshall Islands at Ebeye in the Kwajalein Atoll in the Pacific Ocean as a Seaman First class where he remained throughout the rest of the war. He was in charge of keeping generators running on the island and in charge of Shore Patrol. The U. S. was planning for the invasion of Japan when the first two atomic bombs exploded on Hiroshima and Nagasaki, Japan. This brought about the end of World War II.

Once Ted returned to Pima, he met and married Imogene Jensen on August 2, 1947, in Safford with whom he had five children: Karen, Danalea, Jody Martinez, Ted Elliot, and Kelly. Following work with the Forest Service in Oregon, Ted drove trucks for El Paso Natural Gas, next working on the pipeline. He worked for TransWestern pipeline for 12 years. Wanting to drive semis, Ted got a job in Flagstaff with Yellow Freight Line Co. Eventually they transferred Ted to Albuquerque where he and his family lived. Ted retired from Yellow Freight in 1988. Following a divorce, Ted and his son Ted E. had a towing business together in Sacramento, California.

In lieu of flowers, the family requests donations in memory of Ted to Hospice of the Valley, 2020 E. Woodside Court, Gilbert, AZ 85297.