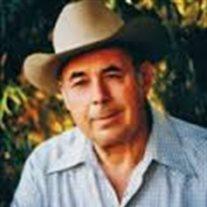 Stanley Frederick Turley, 93, passed peacefully away on Saturday, April 26, 2014. He was born February 27, 1921 in Snowflake, AZ to Frederick Andrew Turley and Wilma Fillerup Turley and was raised on Sundown Ranch in Aripine, AZ. He attended Brigham Young University from 1938-1941 where he was a member of the wrestling and football teams. Following a mission for the LDS church to the Eastern States, he served in the Army Air Corp during World War II and married his college sweetheart, Cleo Olson on October 17, 1944. He was a farmer and rancher as well as Assistant Vice-President of First Interstate Bank. For twenty-two years (1964-1986) he served in the Arizona State Legislature, including terms as Speaker of the House and as President of the Senate. He also served as chairman of the Arizona Parole Board.

Active in local LDS church leadership, he served as a Stake President and later as a Stake Patriarch. From 1986-1988, Stan and Cleo served a mission to St. George, UT, where they directed the church visitors center.

Stan leaves as a legacy a large and happy family. He is survived by his seven children Tauna Lowe (Bryan), Margo Freestone (Steven), Jana Short (Mike), Rick Turley (Marysue Tidwell), Mimi Bowden (Brent), Lisa Stevens and Lesley Shepherd (Mike). He is also survived by his sisters Wanda Smith, Moneta Robison, and Marilyn Larson. Stan loved and cherished his 28 grandchildren and, even at age 93, knew the names of all 56 great-grandchildren. He was preceded in death by his wife of 60 years, Cleo, and his brother Grant Turley.

He loved his family, his religion, and the state of Arizona. The world is diminished by the loss of his common sense, kindness, and sense of humor.