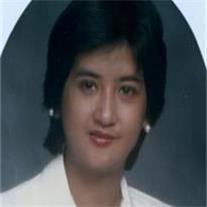 Soledad Navarro Groehler, 54, of Mesa, Arizona was taken to be with her Savior in Heaven while at home on Tuesday, July 3rd, 2012 after a long and fiercely fought battle with ovarian cancer.

She was born in Masbate City, Masbate, Philippines on August 23, 1957 to Andres and Nonita Navarro. Soledad earned a degree of Doctor of Dental Medicine from Centro Escolar University in 1980. Soledad was a dentist in the Philippines until 1986 and was passionate about helping and caring for others, even going so far as to visit patients in rural areas who would not otherwise get to see a dentist. She was married in the fall of 1986 to Larry and emigrated to the United States to eventually settle down in Mesa, Arizona. They were blessed with a son, William, in 1988. Soledad became a CNA and provided care for nursing home patients throughout the East Valley of Arizona’s Phoenix metro area. After being divorced in 2001, she continued her work at nursing homes and caring for others.

Soledad was a very fun-loving person and had the love and respect of many relatives, extended family, and friends because of her passionate and caring nature. She loved to sing, dance, play guitar and piano, cook, travel, and watch Korean TV drama. She especially loved caring for and spending time with her son, traveling and vacationing around the world.

She was preceded in death by her father, Andres; grandmother Conception; sister Milagros; and aunts Budi and Naida.

Soledad was survived by her only son, William, and his father, Larry; her mother Nonita; her sisters Francisca, Nonita, Pilar, Imelda, and brother, Andres.