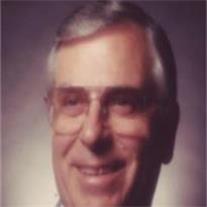 Sidney King Stephenson, beloved brother, husband, father, grandfather and great-grandfather, passed away peacefully in his home on January 28, 2012 surrounded by those he loved. He married Rita Darling on June 2, 1950. After Rita’s passing in 1989, Sid married Jeanne Allen in 1990. He was revered and loved by both families. He served honorably in the U.S. Navy during World War II. He was a businessman with the Albertson’s organization for many years, later owning and operating his own stores. His honesty and integrity were above reproach. He was a devoted member of the Church of Jesus Christ of Latter-day Saints serving faithfully in bishoprics and other capacities. He served church missions in Hawaii, the Baltic States, and in the U.S. He was known for his wisdom, honesty, generosity, faithfulness and unconditional love. Survivors include his children, Sharon (Bruce) Skinner, Caldwell, ID; Craig Stephenson, Blackfoot, ID; Mark (Diane) Stephenson, Idaho Falls, ID; Scott (Debra) Stephenson, Stansbury Park, UT; Susan (Mike) Root, SLC, UT; his wife, Jeanne, and her nine children, Sandie, Craig, Susan, Ron, Shelly, Stacy, Shauna, Sherri and Stephanie as well as numerous grandchildren and great-grandchildren. Also surviving are his sisters, Marion Petersen, Thelma Good, Emma Lou Hartwell, Betty Cushman, Peggy Momb, and Donna Stephenson. He is preceded in death by his wife Rita, granddaughter Stephanie, his brothers, Randall, Robert, and Charles and a sister, Marjorie Armstrong. Funeral services will be Thursday, February 2, at 10 AM at the LDS Cooley Park Ward, 3920 E. Brown Rd, Mesa. Viewing will be one hour prior to the funeral service. Interment will be at Holladay Memorial Park, 4900 S. Memorial Park, SLC, UT on Feb 3, at 2 PM. He will be given full military honors. Arrangements by Bunker’s University Chapel.