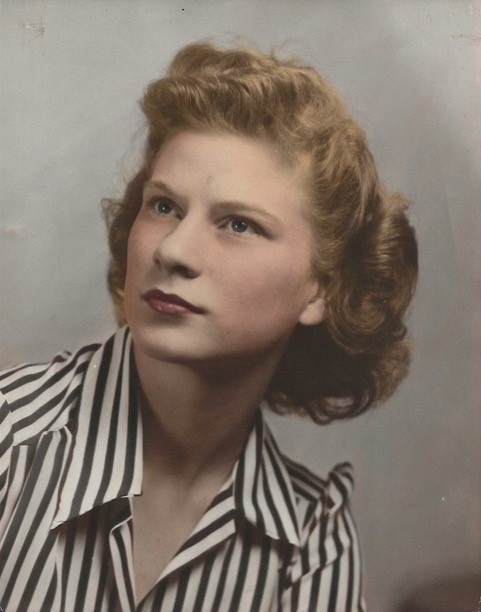 Shirli V. Coons, 95, passed away peacefully on October 12, 2022 in Mesa, Arizona.  Shirli was born to Fredrick William “Bucky” Veil and Mae G. (Robaugh) Veil on December 9, 1926 in Cresson, Pennsylvania.  She was preceded in death by her mother and father, her husband Donald V. Coons, brothers Fredrick Veil, Henry Veil, Charles Veil, and sisters Dorothy (Veil) Thompson, Betty (Veil) Lancaster, and Jean (Veil) Stock.  Her sons Donald Scott Coons and Eric Alan Coons also live in Mesa, Arizona and with her in her final days.  Shirli graduated from the Cresson Joint High School in 1942 and began work as an assistant teller at the First National Bank of Cresson.  Shirli and Donald V. Coons were married on October 20, 1945 while he was a pilot of captain’s rank in the Army Air Corp.  Shirli and Donald built their home in Cresson in 1953, where she lived until moving to Mesa, Arizona in 2014.  In 1958, Shirli took 15 years off of work to raise her two sons, after which she became an office assistant, and eventually Office Manager for the Cooney Brothers Coal Company.  Shirli’s husband Donald passed in 1987, and Shirli continued working at Cooney Bothers until retiring age 68 in 1994.  Shirli is survived by her two sons Eric and Scott, three grandchildren by Scott and Mary Ann (Van Nest) Coons: Allison (Coons) Wolf, Kristen Coons, and Stephanie Coons, and three great grandchildren by Allison: James Coons, Karina Coons, and Logan Valencia.  Shirli will be cremated at the Bunker Family Funeral University Chapel in Mesa, Arizona and will join her husband Donald at the Alto Reste Cemetery in Altoona, Pennsylvania.  No services are planned at this time.  Shirli loved dogs, so in lieu of flowers donations to the Cambria County Humane Society (https://www.cambriacountyhumanesociety.com) are suggested.