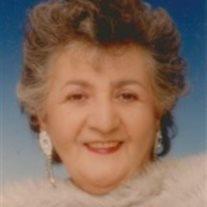 Shirley Rockford (nee Beyda) 83, of Mesa, AZ; passed away March 11, 2014. She was born in Chicago on July 5, 1930. Shirley is preceded in death by her husband Tony, her parents Jack and Sarina; two brothers: Joseph (the late Adele) and Samuel (the late Esther); a sister: Selma Teel; a daughter: Jacqueline (David) Lineback and a step-son Thomas. Shirley is survived by her sister: Rachel (the late Harold) Asper; two daughters: Serena (Juergen Gebhardt) and Shari (Karel) Muns; step-daughter: Sandra (Frank) Mucciante; and four grandchildren: Anthony, David, Tony, and Taylor. She was a loving aunt, cousin and friend to many. A Memorial Service will be held to honor her at a later date. Donations in Shirley’s honor can be sent to Mayfair Assisted Living, 6930 E. Granada St., Mesa, AZ 85207.