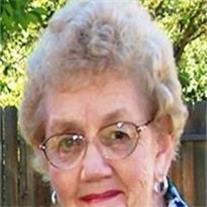 Shirley Jane (Clark) Hinckley, age 78, passed away February 10, 2012, peacefully at home, surrounded by her family in Mesa, Arizona. Shirley was born in Wichita Kansas in 1933 to parents Omar Clinton Clark and Anna Swenson Clark. Shirley was one of eight children. She grew up in Salt Lake City Utah where she attended East High School and also helped run the family portrait studio “The Ritz”. Shirley was a devout member of the Church of Jesus Christ of Latter Day Saints. She was the matriarch of the family and the consummate family woman as well as a tireless volunteer for the church. Shirley migrated to Mesa Arizona in 1970 with her six children and sister Paulie Clark. Upon retirement, from Bank of America in 1995, Shirley retired to the Winston-Salem/Clemmons areas of North Carolina to live until returning to Mesa Arizona in 2011. Shirley took great joy in the history and traditions of her faith. Her strength, will and love of family will always guide us. Shirley had an uncommon wit and sassy sense of humor and will be dearly missed by all her family and friends. Shirley is survived by her four sons David, Mark, John and Randy Hinckley, two daughters Julie Camarata and Debbie Apsey, twenty six grandchildren, ten great-grandchildren, her sister Elaine Ray and a myriad of other relatives. Shirley will be laid to rest in Pleasant Grove Cemetery, Pleasant Grove, Utah. Donations in her loving memory to the American Cancer Society appreciated.