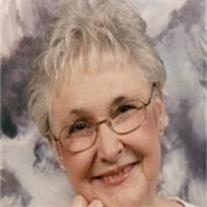 Sharon Maxine Bevell, age 72, went home to be with The Lord on Thursday, September 15th at approximately 10:13am in Mesa, Arizona. Sharon was born in Norton, Kansas on May 20th, 1939. Some of those that preceded her in death were her mother, Olive Sue Hayes, her father, Rufus Conard, her granddaughter, Sara Swisher & her first husband, Charles Freymuth. She leaves behind a multitude of people that will miss her dearly, including her loving husband, William Bevell, five adoring daughters, Mary Cae Armistead, Ann Manchack, Francie Swisher, Paula Sherwood & Ginger Swarner are also left to miss her. Also, her adoring son, Jim Freymuth. As well as her vast extended family, including many grandchildren and in-laws.

Sharon’s life work included working in the Central Supply unit of several hospitals over a period of several years. She then entered barber school & ran a barber shop for many years with her adoring husband, William, into retirement. Her hobbies included reading, sewing, collecting hummels & knick-knacks, shopping, spending time with her kids and being an amazing wife & mother.

May she rest in peace in the loving arms of our Lord and Savior, Jesus Christ for all of eternity.