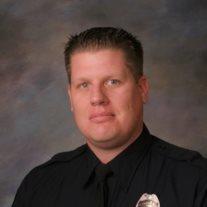 Detective Sean Michael McKenzie, age 41, died tragically in a motorcycle accident Saturday, March 15, 2014. He was born October 23, 1972 in Logan, Utah. His family moved to Arizona in 1973 and Sean became an Arizonan. He is survived by his daughter Taylor and son Jace, their mother Kimala, his parents Lee and Barbara McKenzie, his siblings Michelle Parks (Pat), Jamie Foutz (Tyler), Charlie McKenzie (Sandee), Derek McKenzie, Bree Nguyen (Hai), and 8 nieces and nephews. After graduating from Mesa’s Westwood High School, Sean joined the Army where he served for 2 1/2 years in California and Kansas. After being discharged from the Army he returned to Arizona. Since he was a little boy, Sean wanted to be a Police Officer but his journey was not direct. First he was a Corrections Officer where he served as a guard in the maximum security wing of Florence Prison. Then he joined the Army National Guard and worked at the gunnery training range in Marana. While he was serving in the National Guard, Taylor was born and became a blessing in his life. While working at these other jobs Sean continued to apply to be a Police Officer. In 2001 he was hired by the Chandler Police Department where he served until his death. Jace, another blessing, was born shortly after Sean started his police service. Sean was a Patrol Officer, DARE Officer, school resource officer as well as his current assignment as a detective in the Family Crimes Unit. He was sworn in last week as Treasurer of the Chandler Law Enforcement Assoc. (CLEA). Visitation will be Thursday, March 20, 2014 from 6 to 9 PM at the LDS Church, 2228 E. Brown Rd., Mesa. Funeral services are at the same location, Friday, March 21, 2014 at 10 AM with visitation at 9 AM. In lieu of flowers donations to the 100 Club or CLEA Charities are suggested.