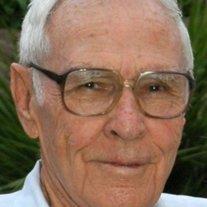 Sam passed away on January 4, 2014, in Gilbert, Arizona, where the family has lived since 1974. He was the son of John H. and Leah Smith Udall and was born in Phoenix on February 6, 1930, and loved being a “Census Baby.” He went through the Phoenix school system, graduating from North Phoenix High School in 1948, with his “after school and summer jobs” of working for his Dad on the farm or the ranch.
He was drafted during the Korean War, spending two years in the U.S. Army as an agent in the Counter Intelligence Corps in Tokyo, Japan, then completed a two year mission for the Church of Jesus Christ of Latter-day Saints in the Southern California area.
He married Helen Druke from Scottsdale on June 6, 1956, in the Salt Lake Temple and went on to obtain three graduate degrees, a Bachelor’s and Master’s Degree from the University of Arizona, and an Ed. S. from Northern Arizona University. These degrees in the Education field helped him in his profession as a teacher, principal, and Assistant Superintendent in the schools in St Johns, Globe, and Gilbert.
Following his career in education, he could see the growth in Gilbert and established himself in the real estate field. During this time he served on the Gilbert School Board for 20 years and has the distinction of having his name on the dedicatory plaques of 26 school edifices. He loved his community service, and loved the Gilbert Schools where his children, grandchildren, and great-grandchildren have attended.
His experience in working on the 9th floor of the Capitol Building in Phoenix with Governor Evan Mecham was a rewarding one, and he also enjoyed working with Tom Freestone in the Maricopa County Supervisor’s Office.
He was an avid “story-teller” and looked forward to telling “stories” to all his family and friends. His favorite pastimes were doing crossword puzzles and watching sports on TV and celebrating birthdays with family.
His service in the Church was varied, from Nursery Leader, Elder’s Quorum President, Gospel Doctrine Teacher, Stake Clerk, and from 2000 to 2007 as an Ordinance worker in the Mesa Arizona Temple.
He is survived by his children, Douglas Druke Udall; Debra (Danny Wilcock); and Roby Smith Udall; grandchildren Kyle Wilcock (Traci); Megan Wilcock; Jordan Wilcock; Kyson Goettig-Udall; two step-grandchildren Jenika and Kaly Wilson; and great-grandchildren, Addison and Easton Wilcock, plus two sisters, Janet Mortensen and Pauline Perkinson (Brad), and one brother, Jesse (Ann) Udall.
A visitation will be held Friday, January 10, 2014 from 6-8 PM at Bunker’s Garden Chapel, 33 North Centennial Way in Mesa, AZ. Funeral Services will be held on Saturday, January 11, 2014, at 10 AM with a visitation one hour prior at the LDS Val Vista Lakes Stake Center, 1005 North Voyager in Gilbert. We express our deep appreciation for the care Banner Hospice provided. Contributions may be made to Banner Hospice, 275 E. Germann Rd, Suite 110, Gilbert, AZ 85297.