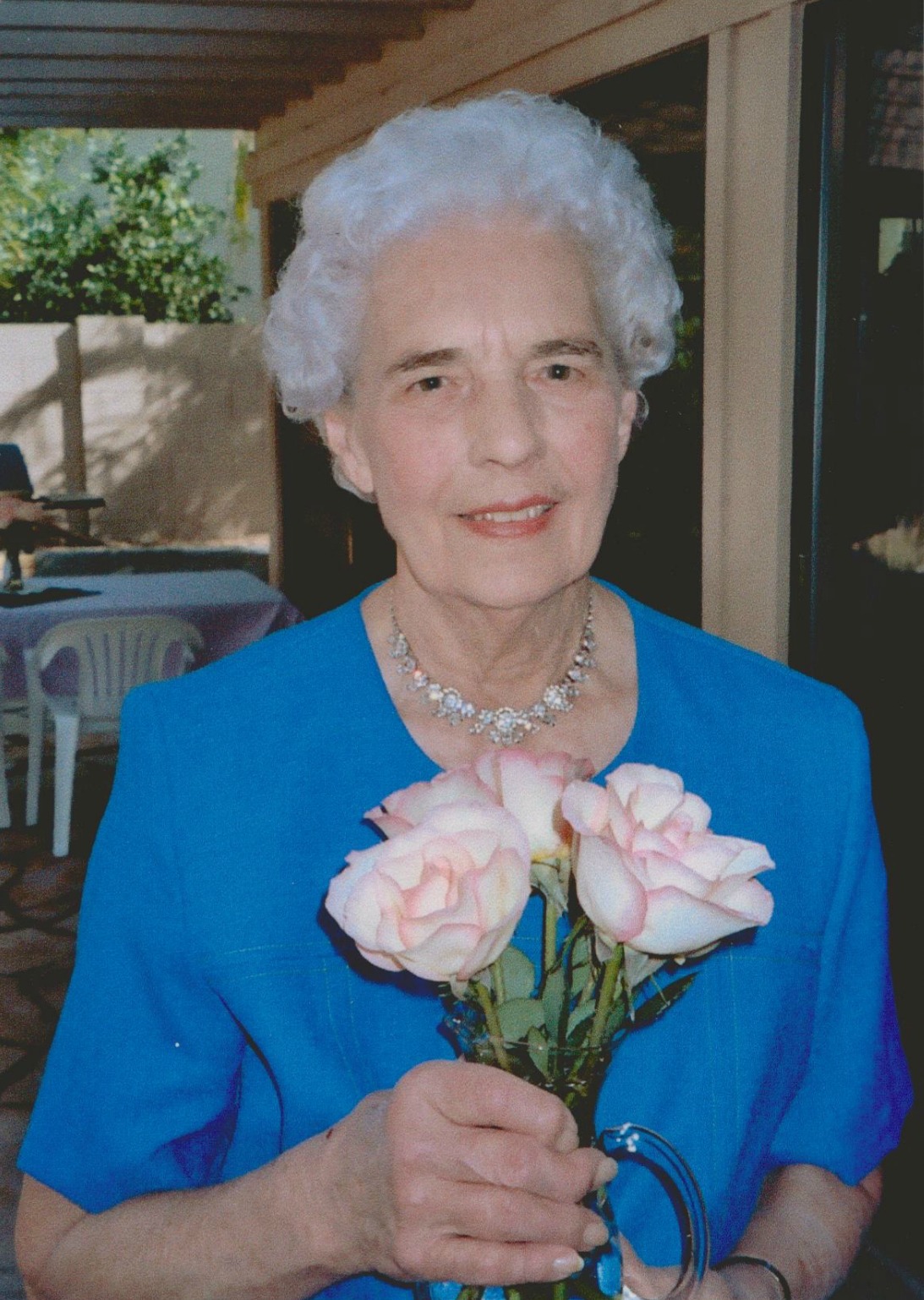 We invite you to join us in celebrating the life of Ruth Lillian (von der Linde) Bailey, 93, of Mesa, Arizona, who went home to be with Jesus Christ, her Savior and Lord, on Thursday, August 10, 2017.

Ruth was born to the late Adolph & Ida von der Linde on a farm at Swaledale, Iowa, on November 9, 1923.  She grew up an “Iowa farm girl” and throughout her school days, was involved in basketball and marching band.  She carried a love for music and sports throughout her life.  Ruth graduated from Swaledale High School in 1940, moving to Mason City during WWII.  Besides enjoying Big Band dances at The Surf Ballroom in Clear Lake, her favorite job was working as a “front desk clerk” at the Cerro Gordo Hotel.  She loved meeting new people and they were sad to see her go, when in 1949 she married the late Milo Mack Bailey–a handsome guy working for AT&T, who was staying at the Cerro Gordo.

His career with AT&T took them through 14 states, with one of her favorites being Arizona. During that time they welcomed 3 children before settling in Des Moines, Iowa in 1963.  She raised her family in Des Moines and in 1979 had an opportunity to move to Mesa where she lived contently for 38 years in what she called her “own little corner of the world”.

Ruth worked at “Lofty Lady”, an East Valley dress shop, where she often met-up with Iowa friends during their visits in the winter season.  She was a stranger to no one, with a smile and encouraging word for everyone.  Ruth lived independently until age 92, and every day she had a goal to “get things done”.   She never lost the qualities of a strong work ethic and instilled the same in her family.

Ruth was a member of Grandview Park Baptist Church in Des Moines and Calvary Baptist in Mesa. Gifted with a “servant’s heart”, she faithfully served in the AWANA program in both churches for over 40 years, along with playing piano for Sunday School, assisting with clerical duties in the office, and ready to help when needed.

Ruth was a breast cancer survivor and although she suffered physical setbacks in many areas, she never complained of the pain and limitations, but rather gave praise to Jesus each day.  She enjoyed travel, sports (rarely missing a Suns, Cubs, or Diamondback game), gardening, playing games with her friends, and shopping!

Ruth is survived by her 3 children, Rhonda Maddex Porter, William (Teresa) Bailey of Des Moines, Iowa, and Bobbi (Jonathan) Dodson of Silver City, NM., along with 2 grandsons, Bradley (Beth) Bailey and Bryan (Ashley) Bailey, great grandchild, Brijet Bailey, niece-Patricia Elliott, nieces and nephews of her late brother/wife Elmer and Bernice von der Linde, cousins including Millie (von der Linde) Pals/98, and her “adopted” family of dear friends–most particularly Donna Molgard for being her best friend and the very best Angel anyone could ever have.

To the staff of Lindsay Manor and Integrity Hospice, there are hardly any words to express our heartfelt “Thank you” for the respect and loving care shown to “Mama Ruth” the past 11 months.  We could not have asked for any better care and support for our mother and our family as you walked with us through this journey.

Memorials may be given to Calvary Baptist Church, 3810 E. University, Mesa, AZ., 85205, for Camp Tishamingo or your favorite charity.