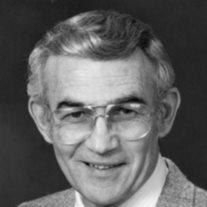 Dr. Russell O. Glauser, 86, passed away peacefully in his sleep on March 14, 2014. He was the second, and much loved, son of Alfred and Emma Glauser born on December 30, 1927 in Logan, Utah. As a young man, Russ was an outstanding student, a good athlete, and a talented singer. After graduating from high school, he entered the Navy V-5 program in Pensacola, Florida where he trained to become a pilot. In 1948 Russ married his sweetheart, Ramona Bell, in the LDS Idaho Falls Temple. In 1951 he enrolled in the School of Dentistry at Western Reserve University in Cleveland, Ohio and it was during this time that he joined the U.S. Public Health Service. After a two-year internship in Flandreau, South Dakota and three years as a dentist at Intermountain Indian School in Brigham City, Utah, the P.H.S. was so impressed by his work that he was authorized to specialize in orthodontics. He and his growing family moved to Rochester, New York where Russ attended the Eastman Dental Dispensary, graduating in 1962. After returning to Utah to begin his career in orthodontics, Russ published a well-received manual on serial extraction in 1967 and was awarded a Commendation Medal from the U.S. Surgeon General. In 1970, the family moved to Mesa, Arizona where Russ continued his active PHS duty at the Phoenix Indian Hospital until 1981 when he launched a successful private orthodontic practice from which he retired in 1997. He continued to be as active in retirement as he had been throughout his life, dedicating himself to his wife, his family and his church. Russ was working two days a week as a volunteer at the LDS Mesa Temple at the time of his death. He never lost his love for life, music, church and family. He was a kind, guileless man who genuinely loved other people and was deeply loved and appreciated by all who had the privilege to know him. Russell was preceded in death by his parents and his elder brother Alfred Junior Glauser. He is survived by his wife of 66 years, Ramona Bell Glauser, and his five children; Diane Campbell (Jim), Sandi Glauser (Sheila), Cheri Christensen (Bob), Marci Shill (Rolland) and James Russell Glauser (Cathy). His legacy includes nineteen grandchildren and fourteen great grandchildren. A viewing will be held Wednesday, March 19 from 6-9 PM at Bunker’s Garden Chapel, 33 N. Centennial Way. Funeral services are Thursday, March 20, at 10AM, preceded by a visitation at 9 AM at the LDS chapel, 3920 E. Brown Rd. Mesa, AZ.