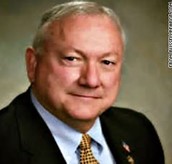 Russell Keith Pearce, age 75, died on January 5, 2023 surrounded by family and friends. He was born to Norma Jones and Hal Pearce in Mesa, Arizona.

Russell had a passion for the development of our Country, State and the government. He served over 24 years with the Maricopa County Sheriff’s Office and completed this career as Chief Deputy. Russell continued his service as the first North Mesa J.P. Judge. He was elected as a member of the Arizona State Legislature where he rose to the position of State Senate President. Russell also served as the Director of MVD and ended his working career in the Arizona State Treasures Office.

Russell’s defining moments were within the walls of his own home. He loved his wife, his brothers and sisters, his children, grandchildren and nephews and nieces. Russell was also an active member of the Church of Jesus Christ of Latter-Day saints where he held many special positions throughout his life. Russell’s acquaintances are many and he cherished their friendships. His service to his God, Family, Country and State seemed endless and will never be forgotten.

Russell is preceded in death by his Parents, Norma and Hal, sister Donna Koozer, and brother Lloyd Pearce.