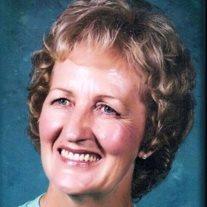 Ruby Joy Stephenson Coombs Parratt, our mother, grandmother, great-grandmother, sister and aunt passed away peacefully in Scottsdale, AZ on May, 17th at 2:45 AM. She was a lifelong member of the Church of Jesus Christ of Latter-day Saints and lived most of her life in Mesa, AZ. She was the thread that kept us all together. Ruby is finally dancing in heaven with the love of her life Arthur Parratt. She could not wait until her and Artie could dance once again. Ruby had several jobs during her lifetime and the one she loved the most was working within the court system. She started out working for Judge Mulleneaux in Mesa and, for several years, state judges in Phoenix, and Gov. Rose Mofford for several years prior to retirement. Her mother felt that if she was old enough to marry at age eighteen, she could make her own outfit to go on her honeymoon. Her mother taught her well as she became a wonderful seamstress. She also excelled at the piano and organ via her mother’s teaching. For a number of years she was organist for her ward. Ruby was a good cook and loved to enter pie baking contests which she usually won. Her pancakes were also the best and every child who entered her life will remember those wonderful pancakes. In her later years, she started making afghans; everyone had to have at least one. During her last years, after suffering a stroke in 2001 that left her paralyzed on her left side and several operations later, she spent her time in a nursing home reading and working crossword puzzles. She kept a sharp mind right up to the end. Everyone will tell you she ran the nursing home and later the group home she was in. Ruby had a two month battle of severe pain, later diagnosed as blood clots. The Scottsdale Healthcare Shea Medical Center provided excellent and caring service. We especially want to thank three of her grandchildren Tammy Coombs, Sharon Coombs and Robert Kelleher for their great assistance in her final days. She is now free of pain and has returned home to the loving arms of God. We will miss her forever. Ruby Joy Stephenson was born in Delta, UT to Ormus William and Ezel Phebe Benson Stephenson on Sept. 28, 1924. Her siblings were: Donald William Stephenson (Leona), Nels Anthony Stephenson (Dorothy), Mary June Stephenson Hemphill (William Stanley) and a cousin, Earl John Steiger (Marilyn), who her parents raised. She had the following children: Tonya Coombs Himes (David), Lynda Coombs Kelleher, Steve Coombs, Russell Coombs (Debbie), and Daron Coombs (Mary). Three infant children preceded her in death: Ormus Wendell Coombs, Elyse Marie Coombs, and Aaron Coombs. Ruby was grandmother and great-grandmother to many.