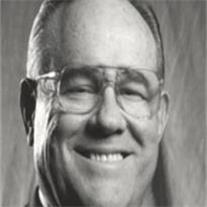 Ross Nash Farnsworth Sr. passed away at his home surrounded by his family on March 2, 2013 at age 81. Ross was born on December 6, 1931 in Mesa, Arizona to Joseph and Annie Nash Farnsworth. Ross had 4 siblings who all preceded him in death: J.A. Jr., Florence, Henrietta, Alfred, and Richard. He loved growing up in small town Mesa and graduated from Mesa High School. He received his bachelor’s and master’s degree from Arizona State University. Ross served a mission for The Church of Jesus Christ of Latter-day Saints in the North Central States which set the course for the rest of his life. In 1954, he married his beloved Anita Cox and they were blessed to have 12 children: Beth Coons (Chad), Ross Farnsworth Jr. (Lori), Julie Ashby (Fred), Joe Farnsworth (Sharanette), Amy Ahlstrom (Craig), Janet Turk (Terry), Bonnie Shill (Mark), Ruth Collins (Dave), Carol Tingey (Mike), Sherri Gurr (Kevan), Tom Farnsworth (Melissa), Jill Geigle (Jeremy). Ross was a land developer in the East Valley, particularly developing retirement communities such as Dreamland Villa, Sunland Village, Sunland Village East, and Sunland Springs Village. He also began several other companies in the Valley. Because of his love for Mesa and its people, Ross gave generously of his time and resources to make it better. He served on the Mesa City Council, was the founder of the La Mesita Homeless Shelter for families, worked tirelessly with United Way and the YMCA, and many other community organizations. Ross’s greatest happiness was found with his wife, 12 children, 63 grandchildren, and 67 great-grandchildren. He knew each one of them well and they all adored their Papa. Ross’s life was worn out in the service of his God, his family, and the community that he loved. A viewing will be held Friday March 8 from 6-8 PM at the Mesa North Stake Center, 933 E. Brown Rd. Funeral services are Saturday, March 9, 2013 at 11 AM, preceded by a visitation from 10-10:45 AM at the Red Mountain Institute of The Church of Jesus Christ of Latter-day Saints, 7126 E. McKellips Road, Mesa. In lieu of flowers the family suggests donations to the Mesa United Way, 137 E University, Mesa, AZ or the Church of Jesus Christ Missionary Fund at 15 E. South Temple, 2nd Floor East, Salt Lake City, UT 84150. Arrangements by Bunker’s Garden Chapel