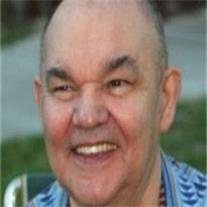 Ronald H. Lax, of Mesa, AZ passed away peacefully surrounded by loved ones on Sunday, June 7, 2009. He was born July 5, 1931 in East Chicago, Lake, Indiana to Joseph Franklin and Carrie Rose Falcone Lax. Ron grew up in Indiana, attending Washington High School; it was there he met Donna. They were married July 1, 1951. After receiving his Bachelor’s degree from Ohio State University and Master’s degree from Indiana University Ron and his family moved to Arizona where he taught mathematics at Globe Junior High, Powell Junior High and Mountain View High School. He loved traveling, spending time with friends and family and genealogy. He was proud of the work he accomplished indexing genealogical records for the FamilySearch database and continued that work up to the time of his passing. He was preceded in death by his parents and two brothers, David (Doreen) and Bruce (Joan). He is survived by his wife, Donna Criswell Lax. Also survived by his brother Jack (Dorothy) Lax, his children Ronna (Dennis) Denton, Vallerie Lax Gardner, Sandy Lax Beals and Sheila (Ted) Heap, 21 grandchildren and 17 great-grandchildren. The viewing will be Friday, June 12, 2009 from 6 – 8 PM at Bunker’s University Chapel, 3529 E. University Dr. in Mesa. Funeral services are Saturday, June 13, 2009 at 11:00 AM at the LDS Signal Butte Building, 618 S. Signal Butte Rd., Mesa. In lieu of flowers the family requests donations be made to a charity of your choice.