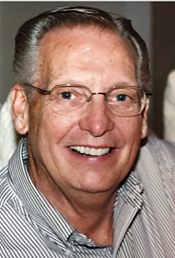 Surrounded by his family and sweetheart, Ron peacefully passed away on   April 14, 2018 in Mesa, Arizona.

Ron was born April 23, 1934 in Paducah, Kentucky to Aubrey Morgan and Lois Inez Cooper McDaniel.  El Paso, Texas became home in 1946 where he lived for 58 years. He attended Ysleta High School (Class of 1952) and met the love of his life Charlleene Arrott. They were united in marriage in 1953. Ron was drafted into the US Army in 1958 and later graduated from Texas Western College (UTEP) in 1961.  He was employed by KROD/KDBC-TV for many years. While in El Paso he was an active part of the Sun Bowl Committee, the El Paso Zoological Society, Yucca Council- Boy Scouts of America, National Conference of Christians and Jews, El Paso Athletic Hall of Fame, and Downtown Lions Club. Ron was a Lifetime Member of the UTEP Alumni Association and El Paso Jaycees. In 1970 Ron was honored as El Paso Outstanding Young Man.

Ron was a faithful member of the Church of Jesus Christ of Latter-day Saints where he served in various callings, but the most memorable was Scout Master for Troop 38. Many of his scouts earned Eagle recognition and Ron was later presented the Silver Beaver Award.

Ron was preceded in death by his parents, a brother Bobby Morgan McDaniel and grandson Daniel Joseph Flores.

The family extends their sincere appreciation to Serenity Hospice and caretakers Anthony, Chelsea and Angie for their gentleness, kindness and the compassion shown to our parents.

Burial will take place in the beautiful mountains of Alpine, Az. In lieu of flowers, please make contributions to the LDS Humanitarian Fund found at: www.ldsphilanthropies.org/humanitatianservices.