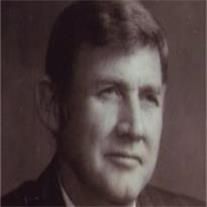 Roger Nephi Ferguson, born September 6, 1932, returned home to his Father in Heaven on April 7, 2012. He died of Asbestosis, peacefully in his home, surrounded by his family. He was born to Byron and Fawn Ferguson in Santa Monica, California. He was the second of 7 children. His family moved to Provo, Utah, where he graduated from Brigham Young High School and attended Brigham Young University. At the age of 19 he married his childhood sweetheart and the love of his life, Sybil Rae Clarke, on July 10, 1952, in the Manti, Utah Temple. They would be married 60 years this coming July. His wife and 5 children were the most important achievements of his life. Roger always enjoyed the outdoors; he loved golfing, fishing, hunting and spending time with his family and friends. Roger always needed to stay busy, and enjoyed people, and sharing what he had. He loved his family, grandchildren and great-grandchildren. He was involved in all of their lives and tried to help each one as he felt was needed. Education was so important to him that he set up an education fund for each of them, and a scholarship education endowment fund for others. He was an active member of the Church of Jesus Christ of Latter-day Saints, where he devoted much of his time and talents serving others. Roger was a true entrepreneur. Together with his wife, he developed Diet Center International, where they had over 2600 franchises. He owned farms, ranches, a fish hatchery, an ice plant, a pharmaceutical laboratory and print shop. He had many real estate holdings as well as development companies. Some of his accomplishments were:

• Farmer of the Year Award from Farmers Merchant Banquet

• Diet Center Inc. was listed as #13 in the top 100 Franchises in America by International Franchise Association

• Who’s Who in America Business

• Inducted into the Idaho Hall of Fame,

• Lifetime Achievement Award by the Rexburg Chamber of Commerce.

• Board of Directors of American Health Co.