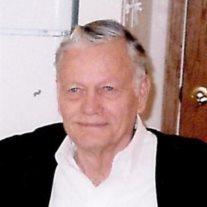 Rodney Harold Cardon of Mesa AZ passed from this life 29 March, 2014. Rod was born Sept. 24, 1929 in El Paso, TX to Joseph Harold and Mary Johnson Cardon. He was raised in El Paso, where he graduated from Austin High School, and went on to the College of Mines, (UTEP) and graduated from Texas A&M in 1955 with a degree in Architecture. He worked as a draftsman in California where he met his first wife, JoAnn Williams. After 3 children were born they decided to move back to El Paso where they had 2 more children. Rod was an Eagle Scout and worked many years in the Scouting program. He taught Seminary for 4 years. After the marriage ended, he later married Joan R Mortensen. They helped take care of Rod’s parents. Next they were called to serve as Senior Missionaries in Sheffield, England. When they returned home, they moved to Mesa, AZ, to be near Joan’s parents. He served for 22 years in the Mesa AZ Temple. He was a member of the Mesa Lamplighters Barber Shop Chorus for 18 years. Rod is preceded in death by his beloved son Tony, and his brother Wayne. He is survived by his sweetheart Joan Rollo Mortensen Cardon of Mesa, AZ. and brothers Mel Cardon (Ada) of Brookings OR, Earl Cardon (wife Lucille) of Heber City, UT, Charles Cardon (Jackie ) of Pleasant Grove, UT, sisters Hallie Marie Cardon Pratt of La Luz, NM, and Bonnie June Cardon Wheelhouse (Lee) of La Luz, NM, children Jill Cardon Pratt (Marshall) of Show Low, AZ, Gail Cardon Dickman (Larry) of San Antonio, TX, Christopher Cardon (Becky) of Pleasant Grove, UT and Jennifer Cardon Young (Wayne) of Provo UT, Step-Children Mike Mortensen (Tammie ) of Safford AZ, Cheryl Mortensen Wright (Norman) of Virden NM, Les V. Mortensen (Crystal) of Queen Creek, AZ, and Lyle C. Mortensen (Tronie ) of Morenci, AZ. He blessed the lives of many and will be missed by all that knew him. Funeral services are Wednesday, April 2, 2014 at 10 AM, preceded by a visitation at 9 AM at the LDS Cornerstone Ward, 422 E. University Dr. Arrangements by Bunker’s Garden Chapel.