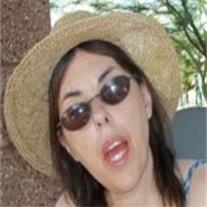 Early in the morning on October 10, 2011, Robin Schaffner went to see her Heavenly Father. After a long battle with MD, Robin is now safely walking the streets of heaven with her son Joshua, who went be with the Lord in 2010. There were many things Robin enjoyed; movies, nice dinners, shopping spending time with her sister, and being a mom. Robin lived life by her rules and didn’t budge on what she believed to be true and right. Robin will be greatly missed. She was loved by friends and beloved by family. Sleep well Robin, for the Lord shall take you in His arms and keep you safe. Robin is predeceased by her son Joshua, mother Mable Maracle, and brother Lyle Maracle. She is survived by her husband, Joseph Schaffner, sisters Connie, Thelma and Carol and her brother Robert, many nieces and nephews. Funeral services will be Saturday, October 29, 2011, at 12:00, at Mesa First Church of the Nazarene, 955 E. University Dr in Mesa, with visitation one hour prior to the service. Contributions may be made to the Muscular Dystrophy Association or Mesa First Church of the Nazarene in Mesa. Arrangements by Bunker’s Garden Chapel.