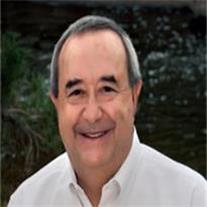 Robin Caroll Hurt passed away peacefully, but unexpectedly in his sleep on Sunday, March 4, 2012 at the age of 63. He was a devoted husband, father, son, friend, and Papa. He left behind his eternal companion Kay Haws Hurt, of 36 years. Preceded in death by his father Robert Hurt and survived by his mother Barbara Weeks and sister Claudia Hoeppner. He also leaves behind his children: Alyson (Justin) Welch, Robin (Kelly) Hurt, Anna (Samuel) Hunt as well as his five grandchildren: Colton, Dillon, Addyson, Briggs, and Sophia. Viewing to be held Wednesday, March 7, 2012 at 10:00 am, with the funeral services beginning at 11:00 am at the LDS Church, 1415 East Southern Avenue Mesa, AZ 85204. Arrangements by Bunker’s Garden Chapel.