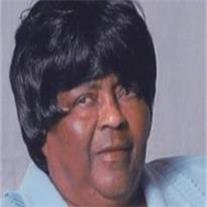 Roberta Kirkwood O’Banner born May 19, 1933 in Greenwood, Mississippi. Her parents Lillie Hill-Porter and Wallace Kirkwood preceded her in death and to this union were three sisters: Rosetta Harris, Ora Lee Seaberry, and Emma Mae Porter which preceded her in death. Roberta attended school in Monies, Mississippi with only an 8th grade education. Roberta married Dorsey Lee O’Banner in October 12, 1951 and to this union six children were born.

In 1955 they moved to Mesa, Arizona where she joined Mount Calvary Church under the leadership of the late Rev. W.D. Hardison in 1958. Roberta was a domestic housewife. She loved life and her children along with her grandchildren and great grandchildren. Everyone loved being around her all the time. Roberta will be sorely missed.