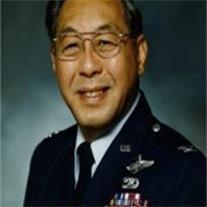 Robert T. Azuma, Col. USAF (ret) Fittingly for a patriot, Bob Azuma passed away on the evening of the 4th of July with the sounds of fireworks. Bob served 37 years in the U.S. Air Force, which included 9 years of enlisted time on active duty, in the reserve, and in the California Air National Guard. He received a rare direct-commission in 1964 and entered navigator training as a 2nd Lt. His Air Force career was varied with assignments in FL, TX, CA, NH, OH, MA and combat duty during the Vietnam War. It was in Vietnam that he was exposed to the Agent Orange herbicide, a possible cause of the lymphoma that took his life. Though he had lived in several places, he considered CA his home state. He was born in Los Angeles in 1937 to Fusayo and Hideo Azuma. His family was confined at Amache internment camp near Granada, CO during World War II when all Japanese-Americans were interned. After the war, the Azuma family moved to Chicago where Bob graduated from Hyde Park High School at age 16. Although he started college, he had dreams of flying and enlisted in the Air Force instead. He served as a flight mechanic and flight engineer. After his active duty tour ended, he remained in the AF reserve, moved to California and began working on a college degree. He was called back to active duty during the Berlin crisis in 1961. In Dec. of that year, he married Kayko Matsuura in Los Angeles during his holiday leave from his base in NH. He joined the California Air National Guard when he was released from active duty and returned to college, earning a BS at Calif. State University, LA. He later earned an MBA from Golden Gate University. He volunteered to serve in Southeast Asia in 1967 during the height of the Vietnam War. During his long career, his assignments included serving as a navigator training instructor; a program manager for flight simulator development; a squadron commander; the deputy base commander at Mather AFB, CA; the chief of staff to the commanding general at Hanscom AFB, MA; and the Director of Center Support at Vandenberg AFB, CA, his last assignment. He retired from the AF in May, 1991. Bob was a master navigator with over 4300 flying hours, including 695 combat sorties in Vietnam. His medals include the Legion of Merit, Distinguished Flying Cross, Meritorious Service Medal with two oak leaf clusters, Air Medal with three oak leaf clusters, Air Force Achievement Medal, and 15 other decorations. He and Kay moved to Gilbert, AZ in 2002 to be near their daughter. He was a member of the Arizona Buddhist Temple, Arizona Chapter of JACL, AF Assn. He is survived by his wife, Kayko, son Brett and wife Coleen, daughter Tamiko and husband Steve Goldinger, grandsons Christopher, Michael and David Azuma, and Sam and Danny Goldinger, his sister Hiroko Miyakawa, niece, nephews, and great-nephews. Memorial service is at 10 a.m., Sat., July 13, at Bunker’s Garden Chapel, 33 North Centennial Way, Mesa. In lieu of flowers, donations may be made to Hospice of the Valley or a charity of your choice.