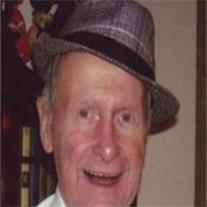 Porter, Robert (Bob) J.,82, departed his earthly home for his heavenly one on December 31, 2012, much to the extreme sadness of everyone who knew and loved him, especially his wife of 22 years, May. Bob began his earthly journey in Michigan 82 years ago and ended it in Chandler, where he was a past Masonic Lodge Master (2003), a member of Scottish Rite, a board member of his homeowner’s association, and attended Tri-City Baptist Church for some time, where he was a member. He graduated from the United States Military Academy at West Point, New York, then trained in Chandler, Arizona, and Marana AFB, also in Arizona, and served as a jet fighter pilot in the U.S. Air Force, rising to the rank of Major. Bob’s academic degree was in electrical engineering, and as such, he worked for a variety of companies including General Electric and concluded his career here in the Valley of the Sun at Motorola Electronics Group where he worked for 25 years. Bob even tried his hand at ranching for a time. He was a man of extreme intelligence, quick wit and sociability, always gracious to business acquaintances, friends and family alike, being especially well loved by his wife’s considerably large family. Bob is preceded in death by his mother Mary, his father Lyle, and his sister Jean. Besides his dear and beloved wife, May, Bob leaves behind his five children: John, Kevin (Grace), Diane (Bill), Eileen (Tim) and Dan (Janet); his stepdaughter Kelly (Jim) and their beautiful daughter Evelyn, with whom he was very close; also ten grandchildren: John Lee, Brandy, Alana, Stephanie, Erin, Kyle, Sean, Danielle, Kaitlan, and Colleen; and seven great-grandchildren. Funeral services will be Thursday, January 10 at 10:30 a.m. at Tri-City Baptist Church, 2211 W. Germann Rd. in Chandler, with graveside services and interment with military honors at the National Memorial Cemetery of Arizona, 23029 N. Cave Creek Rd. in Phoenix, at 1:00 p.m. Please consider your heart when sending flowers: Bob loved lilies, roses and tulips, but there are also many worthy charities to which you may contribute in his name. Arrangements by Bunker’s Garden Chapel, 480-696-6883.